French banks
Home›French banks›PETER HITCHENS: A cashless society is great … if you’re a spy or a thief

PETER HITCHENS: A cashless society is great … if you’re a spy or a thief

Are they trying to abolish cash? It seems the nationwide Covid panic, including the wild suggestions that money spreads disease, has been the pretext for a fierce attempt to drive us into a cashless society.

Getting real banknotes is getting harder and harder every day as ATMs are closed and banks are disappearing.

Even stores that still accept cash often complain that they don’t have change. A cafe near my office has been claiming for weeks that it’s mysteriously ‘unable’ to accept money, so I have to produce a card to pay for a £ 1.25 cup of coffee. More and more bureaucratic pubs seem shocked if they are offered coins or tickets.

You may think they are obligated to accept legal tender. But it’s not quite like that. This rule can only be applied if you are paying off a debt that already exists. If they didn’t give you the goods then there is no debt and they can refuse your money and demand a card.

Personally, I hate and distrust contactless payment, although in recent months I have felt more or less compelled to use it in some places. It makes the money too easy to spend and too easy to steal.

Whenever possible, I have chosen not to make my cards contactless, but sometimes that choice does not exist. I also noticed that the old chip and pin system has become much slower than before.

I shudder at the thought of what might happen in the interval between losing a contactless card and reporting it. The recent increase in the limit for these things to £ 45 was bad enough. A dishonest person could rack up huge expenses in a matter of minutes. But on October 15, it will drop to £ 100.

Is it important? I think so. I’m very worried that the next step is for stores to only accept payments through smartphones, which are already preferred by many places. I absolutely don’t want to pay anything over the phone, so easily lost, stolen or hacked.

I also don’t like the idea that all of my purchases are logged, monitored and reviewed by someone. At the moment, these are just people who want to sell me more stuff, but, as we’ve seen with Facebook and Google, it’s spreading to other areas quickly. 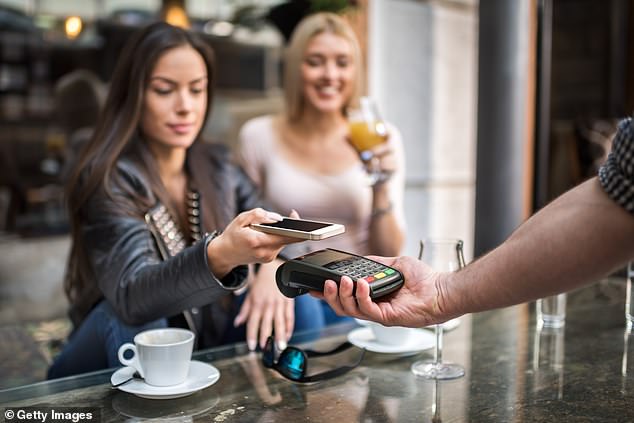 I shudder at the thought of what might happen in the interval between losing a contactless card and reporting it. The recent increase in the limit for these things to £ 45 was bad enough

If money becomes purely electronic, as I think is now likely 20 years from now, then it won’t really be ours anymore. Imagine the power over you that this gives to the banks and the state. Imagine the problems if things go wrong, as has happened more than once in the recent past, with big reputable banks denying their customers access to their accounts.

I laughed at the French peasants who stuffed old banknotes under the parquet floor because they didn’t trust the banks or the state for their savings. Old, foolish, superstitious, backward fools, I thought. Now I am not so sure.

My advice for now: use cash wherever you can, welcome it if you are in business. And the government should reform legal tender laws to require merchants to accept reasonable amounts of coins or banknotes for any transaction.

A cashless society may seem desirable to those tidy and bright people who believe that all change is progress.

But to me, it feels like a big step towards a Brave New World of surveillance, addiction, and a complete lack of privacy or real control over your own life.

I have doubts about the scale and cost of British nuclear deterrence. It is a superpower cold war weapon, as we are no longer a superpower and the cold war ended 30 years ago. We could and should get by with something smaller and cheaper.

But I still find it irritating the self-righteous anti-nuclearism of the British left. The BBC’s new thriller Vigil seems to me to be 90 percent CND garbage. Oddly, he casts the far from lovable Scottish police as a hero, while portraying the Royal Navy as a stone-faced nightmare of obstructionism without humor, bad manners, callousness, lies and brutality. Truly?

Unlike most of those who have criticized this program, I was winched from a helicopter to – and later – the deck of a warship. It was surprisingly pleasant, in its disturbing way. And I spent a weekend as a civilian intruder (not quite welcome) aboard a nuclear missile submarine, the Polaris ship HMS Repulse.

What I remember most of all is the friendliness and kindness of everyone involved, the enduring naval humor that has for centuries allowed men to endure crampedness and danger.

I remember a few things particularly well: standing next to the captain atop the command turret as we negotiated Corryvreckan’s dreaded Whirlpool, a current so fierce it could tip a battle cruiser over.

He was trying to stay clear of a Soviet spy ship and knew that if he got it wrong he could put deterrence out of action for months; a merry dinner in the officers’ quarters 300 feet below the waves, with lots of good red wine (considered by many to be protection against radiation); be allowed to pull the Scalextric-type trigger, during an exercise, which would have launched a missile in real life (the rockets were kept from idiots by two tall men armed with wooden clubs); and the Sunday morning church, where we sang ‘Dear Lord and Father of Mankind, forgive our follies’. Without a doubt that has changed, but I’m still on the Navy side and don’t like the way they’re shown in this drama.

One of the most amazing things happened last week. A complaint I lodged against the BBC was confirmed by its own “Executive Complaints Unit”. Last November, Radio 4 made a number of innuendo against an OPCW whistleblower and against me.

They suggested that the courageous actions of this very principled, non-political scientist might have been motivated by money, and that he had some pretty wild opinions, which I know he doesn’t. They also suggested that I “share the views” of the Syrian and Russian tyrannies. They were all wrong.

It took almost ten months to get there, but I hope the BBC – and others – will now do a decent report on the scandal of what happened at the OPCW, the falsification of a report. vital to justify reckless military action by the United States. , Great Britain and France.

Ministry for the Liberation of Monsters

good now, if the “Department of Justice” feels it is safe to release double child murderer and rapist Colin Pitchfork (my God I hope they are right), how can they continue to justify the imprisonment in pre-trial detention of the brave journalist Julian Assange, who has never injured a hair on anyone’s head?

I suppose there is a risk that Mr. Assange will make another bunk, while he awaits the endless attempt by the United States to remove him and lock him in a supermax dungeon for centuries to come.

He could even walk to a beach on the south coast and make his way to France (it would be fun to see how the French react to some traffic in the opposite direction).

But that’s not really a very big risk, and it would be far more justified than the gamble of releasing the monstrous Pitchfork.

I think it just shows that our government is more afraid of Washington’s wrath than it is that known criminals will strike again.

Why not offer a distance option for ...