Young artists outside the square

The children of Martinborough designed the art to help transform areas of The Square into living spaces, but some residents have reservations. 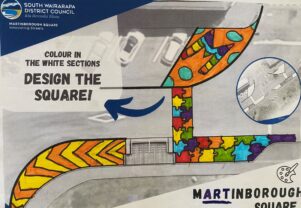 Children’s art presented as part of the Innovating Streets program.

Children submitted over 40 colorful drawings, including rainbows, mountains, sea creatures, water lilies, puzzles and even a New Zealand flag as part of the fun and informal competition to change the world. appearance of a small part of Martinborough Square.

The art will be one of three larger designs that the public can vote on at the Waihinga Center later this winter.

The winning design is expected to become a dynamic temporary addition to the road outside the plaza.

The community initiative is coordinated by the South Wairarapa District Council as part of a larger national program by the New Zealand Transport Agency to transform parts of New Zealand’s streets into more vibrant areas and more secure.

The area outside the Martinborough Hotel and Cool Change Bar on Kitchener Street was chosen so that the street art would be applied directly to the road, which would make this part of the road predominantly pedestrianized.

Becs Reilly, owner of the Ventana Collective art space in Martinborough, and artist Andy Shaw will decide which combination of children’s art will be part of three digital versions.

“The kids made the designs, and Andy will take inspiration from all of the designs and create digital designs.

“I love to see them use patterns, and it’s a pattern representing something,” Reilly said of the children’s artwork.

“We explained to the children what was going on, gave them blank sheets and they drew patterns. We gave the kids some ideas to work with, including the night sky, rivers, ocean, and mountains, and asked them to create their designs based on color, lines, patterns, and shapes.

The children were all from Martinborough Primary School or Ventana Collective art classes.

The designs are meant to be painted directly on the road, next to the sidewalk, on what is asphalt. The width of the road will be reduced to make it more pedestrian friendly.

“There might be some planters and some sort of barrier at the start, so it will be very obvious that people won’t be able to drive over the painted areas,” Reilly said.

The area would also include platforms, benches, and other things for people to use.

“This will make it a more engaging space for the community. “

South Wairarapa Mayor Alex Beijen said he fully supports the early engagement of children in the project, but said the proposed changes were a trial run and permanent changes would be subject to public consultation as the project progressed. time.

“It’s nice to see young children having the opportunity to get involved at an early stage. I want this to be a community initiative.

“I totally support him, I can’t wait to see what the public chooses,” he said.

“What evidence is there that there was a safety issue or near misses or injuries at The Square?” He asked.

“I just want to know if there have been any accidents or near misses.

“Why don’t they look at what has been done in Wellington to lower the speed limit in certain places?

“You talk about putting up barrels and climbing plants, so if you’re in a moving car [the Square] and someone is stepping on the crossing, you may be narrowly avoided.

“It seems to me that you are trying to condense the area, especially around the zebra crossing. “

Fenwick believed that pedestrian views of oncoming traffic would be restricted.

The NZTA program was designed to help the sector plan, design and develop cities by helping to target street upgrades to reduce vehicle speeds and create more space for people.

A fund of at least $ 29 million was available for council projects.

The agency aimed to help councils more easily make temporary or semi-permanent changes to streets, improvements that can test permanent fixes, and other projects that can help communities reimagine their streets.

The timetable for the installation in the center of Martinborough was not yet fixed but was expected at the end of August.

School trips to UK from EU could ...